Should a Belly Dancer Be Sexy? 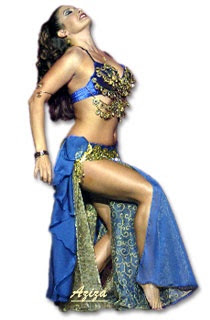 With love and sex on the minds of many today, I thought it would be apropos to discuss a question that's been on my mind lately: Should a belly dancer be sexy?

Well, depending on who you ask, you'll likely get different answers, including some pretty strong opinions.  The most common stereotype of a belly dancer is of a scantily clad woman gyrating and writhing around in some public venue as audience members push tips into her costume.  That it is some type of low-brow art form, with lots of sexy and sex sells going on.  Case in point, I've heard a father remark to his young daughter, "don't get any ideas" as I've danced past their table (and let's get this straight, it was in a non-writhing, family-friendly fashion) at a restaurant.  But ask most belly dancers, and they'll tell you they are pretty offended by this stereotype.

Stepping back, let's define what we're talking about. What does it even mean to be sexy?  Webster's dictionary has two definitions, "1: sexually suggestive or stimulating" and "2: generally attractive or interesting".  Hmmm, okay. Well those are two entirely different things.  I find a large number of items, like Dali paintings, sequin ballet flats, Paris, and  high-end stationary to fall under definition #2, but certainly not definition #1.  However, as a society, we seem to be fixated on definition #1.

I would say that unfortunately, our society has demeaned, marginalized, and eroded what it truly means to be sexy.  Our culture in the U.S. is one where we are constantly bombarded with visuals of hyper-sexual women, whether it's Victoria's Secret Angels prancing down a runway or Kate Upton in a too-small bikini.  We have fashion magazines exploding with touched-up images of perfection.  (By the way, take a look at this project illustrating the ridiculousness of fashion editorials.)  Now, I would like to clarify that I'm not judging either Victoria Secret, Kate Upton, or any others like them, as I believe they have a place in our collective culture.  But sadly, this is typically the sole image of femininity that we are presented with.  It's only one facet of being sexy, and it's not the facet that comes from a position of strength and respect for women.

Which brings me back to belly dance.  When being stereotyped, most belly dancers are being compared to, or expected to look like, these media images of sexy without any further dimension.  But in dance, what we really want to get into is definition #2.  When my audience watches me dance, yes, the costume and the visual image are part of the presentation, but they are only one part.  Like all professional belly dancers, I've spent countless hours studying not only the dance technique itself, but the history, culture, and music behind the dance.  So when I step onstage it's much more than just outward appearances.  It's the culmination of many years of hard work.  It's my goal to take all that hard work and get my audience to see the music brought to life.  I want them to see the crispness of my isolations and the soft flutter of my silk veil  I want to transport them.  I want to engage them.  In short, I want them to find the performance interesting.

So does that mean that outward appearances don't matter? Is sexy just an artistic state of mind?  Well, I would argue that no, that's no entirely correct either.  Dance is a visual art form, and as such, a dancer's outer appearance is part and parcel with the performance.  You cannot separate the two.  In an art form where a costume costs on average $600 to $1,000, there is a substantial investment in the outward presentation.  A professional dancer would never just expect to show up and perform.  Time and money are invested, not only into the costume, but into hair, makeup, nails, jewelry, and more.  And I would even go so far to say that her demeanor should convey a certainly level of sex appeal.  And by a certain level, I like to think of it as more goddess than sex kitten.  She's doesn't need to flirt with her audience.  And I certainly think a belly dancer should not be performing any lewd or suggestive moves. But she should most certainly be confident.  Because in any situation, confidence really is the ultimate in sexiness. She should smile, look me in the eye, let me know she's comfortable inside her own skin, and that she's in charge of what's going to happen in the upcoming minutes.

So in my opinion, yes, a belly dancer should be sexy.  Yes, even definition #1 sexy. Her appearance should be put together and with well-manicured hair and makeup.  Her costume should fit in a flattering manner and be appropriate for her body.  But she should also present the deeper dimensions of the dance to me.  Definition #2 sexy.  As I'm watching her, I want to be drawn in by her, but I don't want her sexy speaking so loudly that I can't hear her dance or see her talent.  I don't need overaggressive sexy pushed into my face or flaunted for the room.  But rather it should just smoulder and simmer below the surface, leaving me space to marvel at her whole presentation. 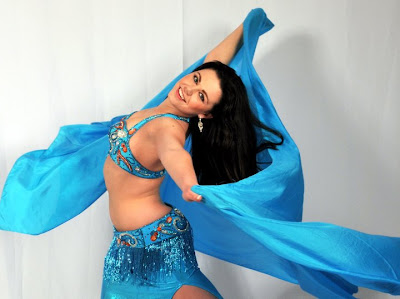 The Introduction
You recently saw her place as the first runner-up out of an amazing group of dancers on the reality show Project Belly Dance.  But her dance resume extends far beyond.  Based in San Francisco, Ziva is a belly dance instructor, performer, choreographer, and program director.  She’s danced with the award-winning Ya Habibi Dance Company.  Studying and teaching workshops with master percussionist Souhail Kaspar, has taken her as far away as Japan and Turkey.  She was also selected as a competition winner for Jillina’s Bellydance Evolution.  Learn more about Ziva on her website.

The Interview
Having pre-arranged a time for our phone interview, my phone rings promptly at our agreed upon time (punctually is not a widely known trait among belly dancers!).  Sounding bright and bubbly, I can feel her positive energy through the phone.  We dive right in.

Alessandra: As dancers we feed off each other.  What other dancers are currently inspiring you?
Ziva: I’m inspired a lot by the dancers around me, such as the Hipline instructors and my coworkers, Samar Nassar, Rebecca Vasile, and Kendra Katz.  I would also include my original teacher on the Pacific coast, Shoshanna.  On a more global scale, I would also add Daria Mitskovich, Didem, Aziza, Soheir Zaki, and Zoe Jakes.

Alessandra: As I think most of the belly dance community is aware, you were just recently the first runner-up on Project Belly Dance - congratulations!  But of course we want to hear the inside scoop!  What about the competition that wasn't depicted in the episodes do you think the audience would find the most surprising?
Ziva: Thank you!  Probably the most surprising, is that the competition was filmed in the span of two days.  After the first round of cuts, there were already people lining up outside for our first performance in front of a full audience.  So you really had to be on your toes!

Alessandra: Was this your first belly dance competition or had you done other ones before?
Ziva: This was my first competition in front of live judges.  I had done Jillina’s belly dance competition where you submit your filmed audition video, but it is a completely different scenario when you can do multiple takes and edit your performance.  This type of live competition takes the challenge to a whole new level.
Alessandra: Well, you seemed very confident and composed!  Was that how you were actually feeling, or were there underlying nerves?
Ziva: My nerves were definitely running on high!

Alessandra:  What did you think was the most challenging aspect of the competition? Ziva: Believing in myself.  Each of the dancers was amazing in her own way, so I had to really work to stay focused on what I was doing.  I really had to be my own cheerleader.  I think also, you had to be hungry for it and have that desire to do your absolute best to be able to continue on each round.  I would also add that it was hard to watch dancers get cut.  My heart went out to them.  Participating in the show really illustrated to me that you have to be prepared for anything.  For example, in the “Name That Tune” section, you needed to have studied culture and music to excel.  Or even just makeup; who would have thought that putting on your eyelashes would be a monumental thing!  Just goes to show that you need to be strengthening your skills as a dancer on a daily basis.

Alessandra:  If you could go back and change something related to your performance, what would you change?
Ziva: I would say more time for preparation, as I felt mine was rather limited.  But then, I think most dancers feel that way all the time.  However, on the flip side, in my last performance of the competition, despite having prepared a choreography, I decided last minute to just dance from my heart and improvise.  (If you want to view that performance, if can be seen here.)

Alessandra:  What doors has being on Project Belly Dance opened for you?
Ziva: Just having people reach out to me through Facebook and other social media and letting me know that they liked my dancing and really believe in what I’m doing has been amazing.  It’s really opened the opportunity for me to network with other dancers.  And of course my upcoming DVD with Cheeky Girls!
Alessandra: Do you have a topic yet?
Ziva: The topic is still in the works.  But it’s going to be fun and challenging.  We film in February.

Alessandra:  Even before you were on Project Belly Dance you were touring around the U.S. with Grammy-nominated drummer Souhail Kaspar doing workshops.  What have been your top takeaways from working so closely with such a talented musician?
Ziva: He has so much information.  Every time I’m with him I learn more about how rich Middle Eastern dance and culture is.  Having a mentor is vital.  Also how universal dance is.  We recently taught together in Japan, and even though there was a language barrier, it really illustrated that with dance we can communicate with our movements across spoken language barriers.

Alessandra:  What advice would you give to beginning belly dance students?
Ziva: Technique can be frustrating, so I think beginners need to know that it’s muscle memory.  Try to relax and know that it will come.  Having a sense of humor is important.  And staying motivated and inspired, either through watching YouTube or other local performances.  And finally, goal-setting is key.
Alessandra:  And what advice would you give to dancers looking to make the transition to professional?
Ziva: Whether you want to think of your dance as a business or not, it’s really important to determine how much time you want to invest in it.  How much you put in, is how much you’ll get out of it.  To be successful, one hour per day is not enough.  You also need to invest in a website and business cards.  And find a mentor.  Not just someone who can coach you on technique, but also musicality and meaning.  Try to branch out and see other dance communities and network with dancers in other cities.  And keep saying yes to every opportunity. 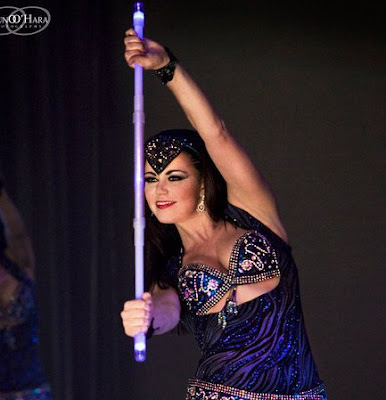