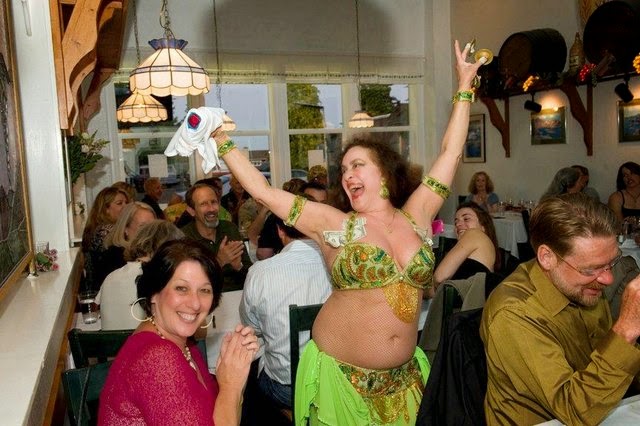 This is part two of my interview with legendary dancer, Zaphara. After chatting with Zaphara, she had so many wild stories, that two posts were necessary to fit them all in! You can read part one here.


Alessandra: How has your Greek heritage influenced your belly dancing?
Zaphara: Overall, I have a passion for the music and the dancing. I love Greek music because I can understand the words, but I also love Arabic music.  Even though I can’t understand the words, it still gives me a sense of what it’s about and evokes a feeling.  Also, being Greek has put me in a position of representing the Greek community, and in particular, Greek women.  But then overall, that’s generally a problem for all dancers, is that they are representing not only themselves, but dancers and women in general.  The general expectation is that dancers are second class citizens, so you have to prove yourself; whether Greek, Arabic, Turkish, or American you have to take into consideration how you are dancing.


Alessandra: Between your length of time of time as a professional dancer, and your fiery temperament, I know you’ve got to have some great gig stories. Have any that you care to share?
Zaphara: Oh, I’ve got so many gig stories.  One happened at the Lebanon Restaurant in , in the l980’s.  It was THE hot spot and always packed.  Lots of Arabs would come and it was a place for them to bring a guest to show off their culture.  This night, Omar Batiste was playing tambourine, Imad Fata on oud (Lebanon), and Shiham Sbeit on tabla (Palestine). And we had a big table filled with the soccer team from the .  One of the players was an Arabic guy and wanted to bring his teammates in to see what his culture was about.  At the time, when the dancer would go out for tips, it was common for patrons to help her up onto a chair and then onto their table to dance.  And from there, they would tip her on her belt.  As I was up on the table, one of the American men on the soccer team, put his hand under my skirt and was about to go up my leg.  I took a handful of his blonde hair and yanked as hard as I could. I could definitely tell it hurt. And his buddies roared because I had shown that son of a bitch!  Wrong place, wrong move, Dude!


Another time when I also ended up inflicting pain on a customer was at George’s Bar and Grill.  I was dancing there three or four nights a week, and we were having a really big busy night.  Taki’s band was playing, and there was a table with two guys sitting near the stage area.  As I was dancing, one of the guys, stuck out his tongue and licked his lips suggestively at me.   When I saw that, I just lost my temper inside and turned away from them.  But when I turned back around, he did it again! So I slowly danced over to him and put my hand under his chin and suddenly, I slapped his jaw up.  At that exact time, he happened to have his tongue out of his mouth and I ended up drawing blood!  His buddy just roared.  Taki kept playing but was looking at me with eyes big as saucers because I just assaulted a customer.  But after that the guy stopped this behavior,  and watched the show.  I was so upset that I ran back to the kitchen and told my boss to get this guy out.  He needs to be in a strip club, not a Greek club.  After the show, the man walked over and he apologized to me. Fortunately, rather than suing me or the club.


On another night, also at the , we had a large party of Saudi royalty in.  You could tell they were well to do with Rolex watches and nice suits.  Their wives were there too, with the black traditional dresses and head coverings, sitting quietly while the men were clapping and talking.  I noticed one elderly lady in the group who appeared to be the matron of the group, smiling at me.  When I went out for tips, I was going to stay away from them, but ended up going over to the old lady, and as she was reaching to tip me, I said thank you in Arabic, sokran, and suddenly her face stopped smiling and looked mortified.  I thought oh no, I’ve said something really bad.   I finished , went back to the kitchen, asked the  kitchen crew what I said,” sokran.”  They started to laugh and said that I’d actually called her a drunk.  I’d said sokran, rather than shokran, which means “thank you.”  Well, I got dressed went back out and apologized profusely, and finally she took my hand and smiled.


And I have another story involving Saudi royalty.  For a time, Seattle had various Saudi princes who were here going to college here.  They were obviously well to do and for Seafair one year, a prince with a beautiful house on Mercer Island had hired myself and the M.B. Orchestra to perform at his party.  The house was enormous with a big pool outside of the kitchen, blue velvet walls in the living room, two 80-foot “cigarette boats” sitting on his dock, and women all over the place with four hanging all over the prince.  Bahaa set up his keyboard near the edge of the pool, as they had specifically requested a candelabra dance.  The prince also had two or three body guards, and one was half drunk, completely excited, and playing a tambourine.  The drunk body guard kept coming near me and I put my hand out for him to keep his distance because I had 13 lite candles on my head and I can’t balance it if I get rattled. Well, he kept trying to dance with me and I lost my temper. I looked at him, smiled, and said can you swim? He said yes, and I pushed him into the water, tambourine and all!  I just can’t understand why we were not hired back (smile).


Alessandra: What advice would you give to new dancers?
Zaphara: Practice, practice, practice. Sometimes it takes 10 years to be really good at this.  I took 10 years of lessons, and my teacher was constantly there criticizing and critiquing me, so with every performance I would learn.  The other very important thing is learning to freestyle.  My teacher threw me into the fire pit and I was fortunate to start with live music, dancing with the MB Orchestra and Taki Dotis.   I tell my students to dance to live music when you can find it. I remember doing a show with Spiros and we had a young drummer with us who didn’t know the beats.  So when we got to the end of the show and drum solo time, Spiros started giving me a solo with the bouzouki instead.  Two of the strings flew out and broke and he kept going. I just went with it.  We were hot.  It was something you could never repeat, so much energy I can hardly remember it.  The audience went nuts and the drummer seemed stunned but did a great job following us.   Those show experiences are a “natural high”, better than drugs or sex!!!  And you never know when this will happen!
Alessandra: And what advice would you give to dancers who are newly professional or looking to turn professional?

Zaphara: Sharpen your claws! Get out there and dance where ever you can to get your name out there.  Go to different places. It’s really hard to be a professional dancer right now, because there are limited  nightclub venues to hone your skills. But network with other dancers and try to get a name for yourself.  Advertise. Keep working it and try to get gigs. And always conduct yourself in a professional manner at all times.


With that said, may I introduce you to my alter-ego, Miss Jess E. Belle: 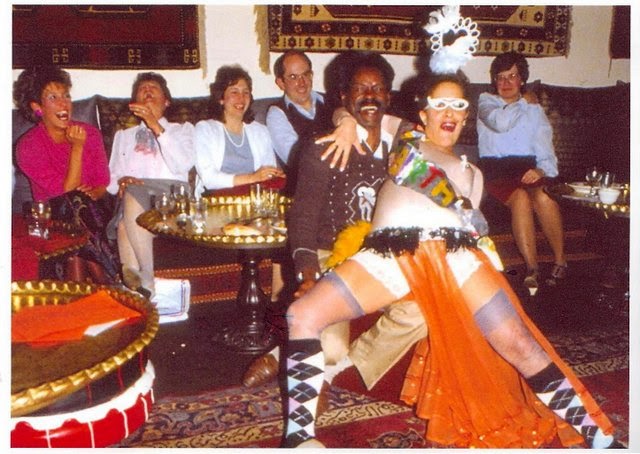 Zaphara’s Picture Explanation: Back in the day all the dancers were divas and I thought it would be fun to do a parody of this, so Omar and I put together Miss Jess E. Belle, who had made any early appearance  for Omar’s birthday party 20 years ago at Mamounia Restaurant. Miss Jess E. Belle is the hilarious epitome of inappropriate behavior & bad attitude for a dancer. She has been around a long time. She is terminally nine month's pregnant.  The sign on her back says "I should have danced all night".   She is slightly disheveled, hair, rollers, whatever. Her belly dance outfit? It’s not perfect, (ok, it's a mess).  She is grouchy, short tempered and being "ladylike" is not one of her strong points. She has been known to frequent the "tenderloin" district and her beverage of choice is any brand of fortified wine! She just loves to nibble on musician's necks and "paw" them while they are entertaining audiences. She always shows up uninvited.


ictured behind Omar and Miss Jess E. Belle, are members of Baladi Center Dancers, the first bellydance troupe in the N.W. that began in the early 70’s.  From left to right: Cindy Muir, Lorie Muir-Graff, Lorie Jones, Bill Jones, Mary Mohler (Karija - director of the Baladi Centre Dancers).
Posted by Alessandra at 11:59 AM